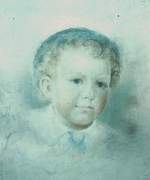 From the earliest days of his childhood, William Gray Purcell came under the care of his maternal grandparents, William Cunningham and Catherine Garns Gray. His parents, Charles and Anna Purcell, moved in with the Grays shortly after their marriage and it was to the Gray home in Oak Park that they brought their newborn son in July of 1880. For a variety of reasons many of the duties of motherhood were taken up by Catherine Gray, who effectually became mother to her grandson. Although the Purcells eventually moved into their own home, except for brief periods the young boy remained with his grandparents over the next five years. In 1886, William Gray Purcell began living permanently with them at his own request, a decision that was of great consequence to the formation of his character. Under the mature influence of his grandparents he was challenged to participate in an intellectually and morally stimulating environment. Since W. C. Gray was a prominent public figure, the Gray home often hosted social events attended by well known men and women, particularly authors, Presbyterian clergymen and social reformers. From the time he was old enough to be present in company, Purcell was faced with stimulating impressions of the progressive ideals and attitudes in which his own philosophy came to be firmly rooted.

A literary atmosphere was fostered above all. Many evenings were spent gathered beside by the hearth as books were read aloud or the Grays recited from memory their favorite poetry. By age six, Purcell was learning to read and write. The Gray home contained a collection of several thousand volumes whose titles were constantly changing as book were acquired and given away, and Purcell was always encouraged to handle them. He was also given subscriptions to popular publications for children, such as the St. Nicolas Magazine and The Youth's Companion. As Catherine Gray tutored her grandson in artistic techniques through a series of volumes on drawing, he began accumulating sketchbooks from an early age. In time, the growing boy would also take up a variety of musical instruments.

Purcell began his formal schooling in the same Oak Park public school that had first attracted his father to the village, the old Central School that opened in 1869. After two years he transferred to advanced programs in two other grammar schools before returning to the Central School for the fifth and sixth grades. In the fall of 1892, Purcell became ill and withdrew from the public schools. Instead, he attended the "Classical School" run by Helen E. Starrett and of which W. C. Gray was president. The Starrett curriculum focused heavily on the study of English literature and the development of writing skills. During the two years that he attended the school Purcell demonstrated a growing excellence in the appreciation and command of the language that would be of great benefit to his later literary pursuits.

The same year Purcell arrived to live with his grandparents another family event occurred that was critical to his future development. For many summers, W. C. Gray had taken fishing vacations on the peninsula of upper Michigan. In 1885, however, he was saddened to realize the extent to which the environment had been despoiled by destructive logging and mining practices. The following year Gray decided to explore the relatively undisturbed forests of northern Wisconsin instead, and was drawn seventeen miles south of the shore of Lake Superior by the enthusiastic description of a wilderness paradise by a local guide. There, amid the clear waters of one of the many glacial lakes of the region, Gray came upon an island crowned by a primeval stand of Norway and white pine, fringed at the edge with groves of white birch. Immediately taken with the beauty of the place, Gray arranged the purchase of the surrounding three square miles in co ownership with the recently widowed Nettie Fowler McCormick. Every following summer from 1887 until his death in 1901, Gray brought his family, friends, and associates to Island Lake Camp, as the isolated forest enclave came to be called, to share in the challenge and reward of a life close to primal, untouched nature.

The pioneer spirit that Gray evoked in the isolated settlement reflected his own early experiences as a child on the Gray homestead at Pleasant Run. A series of log cabins were built, some using the same design as the original Gray home at the family homestead in Ohio. Most activities at Island Lake Camp took place outdoors and many were directed toward the practical necessities of survival. For the first years of the camp all provisions had to be brought with great effort from a distant railhead, and as much food as possible was taken from the resources of the forest. Hunting provided meat and furs, and fish caught in the surrounding lakes were salted or smoked for storage. Each spring a garden was planted to supply fresh vegetables. Purcell took part in everyday chores and often brought his own contribution to the dinner table.

For pleasure, there was swimming, boating, pitching horseshoes, exploring the surrounding forest, or experimenting with photography. At night, the community gathered around the campfire, where stories and music brought the day to a close. Late at night, Gray retired to his cabin, known as the Library, where wrote his weekly columns for The Interior. Called "Camp Fire Musings," these articles shared the doings at Island Lake Camp with thousands of readers who eagerly looked forward to each installment. Many of the writings told of the adventures of the two "Willies," William Gray Purcell and his cousin, William F. Gray, as they encountered the wilderness experience.

Life at the camp of log cabins taught inventiveness and utility with the materials at hand in an environment composed of the constant interplay of wood, light, water, and earth. The young Purcell was brought to close contact with the fundamental relationships of man to nature in a cooperative sharing of experience. Egalitarian social arrangements at Island Lake Camp instilled a direct understanding of democratic life. Community members ranging from the Cyrus Hall McCormick family to Ojibwa Indians mixed freely and shared their conversation at the common camp fire, the symbol of which would later persist in every Purcell designed fireplace. The combination of nature and democracy provided the foundation of thought on which Purcell based his practice of architecture.

During this time Purcell also became skilled as a photographer, his hobby made possible by the newly available commercial outfits which supplied camera, photographic plates, processing chemicals and printing papers in one package. Purcell received his first camera from W. C. Gray in 1888, a Kodak model given to The Interior office just before public release of the product. In time Purcell grew quite expert at all phases of the work involved and one year advertised his services with a notice in the Oak Park High School newsletter. Together with his father and grandfather, who were also avid photographers, he recorded the events at Island Lake Camp as well as documenting the appearance of the Gray home in Oak Park.

During the 1880s, W. C. Gray sponsored through his weekly newspaper a contest for aspiring artists. The winning entry was submitted by Lawton S. Parker, a fourteen year old boy living in Kearney, Nebraska. Gray wrote to the young man, complimented his work at such a tender age and inquired if he planned to develop his talent by attending school. Since Parker was from a poor family and had little prospect of artistic encouragement at home, Gray offered to supply room and board if Parker wanted to come to Chicago and study. Parker gratefully accepted the help and remained at the Gray home for several years before, then left for a time to make a living as a portrait painter in Kansas City. Eventually, the artist returned East and managed to support himself in New York where he won the $5,000 Chanler Prize. Having the funds to study abroad, Parker left for Paris where he took instruction in the atelier of James Whistler, with whom he became good friends. Returning to America in 1892, Parker went immediately to Island Lake Camp to start work on a portrait of his benefactor that was placed in a gallery of Midwestern notables at the World's Columbian Exposition of 1893. Parker thought the picture inadequate, however, and painted a second one (shown above) that long remained a favorite of the family.

The advent of the World's Columbian Exposition was an important moment in the life of William Gray Purcell, as the fair was for the many people who came to see the fantastical White City that evoked in wood and plaster a fantasy of architectural forms from the long dead Greco Roman culture. One pavilion, however, did not apply a facade of columns and gratuitous fake stonework. The Transportation Building designed by Louis Sullivan was a vibrantly colorful exception to the surrounding historical allusions, especially the dynamic and unique ornament that enriched the Golden Door entrance. From his trips to the Auditorium Building, completed several years earlier, Purcell was already aware of the designs being built by Sullivan. In later years he declared that the spirit of architecture first spoke to him beneath the sweeping golden arcs of the Auditorium theater, and the voice through which he heard his vocation calling was that of Louis Sullivan.

When Purcell was fifteen, Frank Lloyd Wright built his Oak Park studio on the same block where Charles A. Purcell lived, not far from the Grays. Purcell daily watched construction progress and especially noticed when the ornamental sprites sculpted by Richard Bock were tucked underneath the eaves. He wandered throughout the neighborhood to see other Wright designed residences as they were put up, and he eventually came to meet the architect. In Chicago, where Purcell went frequently to visit his grandfather at The Interior offices, the work of Louis Sullivan continued to impress the young architect to be. His mind was already made up to pursue the study of the building arts in college and, following his graduation from high school in 1899, he entered the School of Architecture at Cornell.